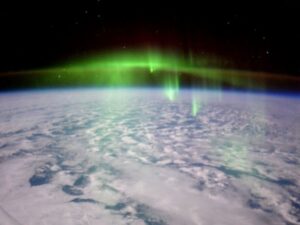 Dr Jonathan Eastwood, Senior Lecturer, Department of Physics - Director of Imperial Space Lab, a network of excellence of Imperial staff working with space agencies around the world, including NASA and ESA.

He has played a part in several currently operating science missions looking at the relations between the Sun and the Earth, including Cluster (ESA), THEMIS/ARTEMIS (NASA), STEREO (NASA).  His most recent involvements are with Magnetospheric Multi-Scale (NASA), Solar Orbiter (ESA) and Jupiter Icy Moons Explorer (JUICE) (ESA).

Colossal eruptions of material and light from the Sun’s atmosphere travel through space and interact with the Earth’s magnetic field.  This generates amazing auroral displays. However, these beautiful phenomena have a darker side, as ‘space weather’ affects human life and technology both in space and on the ground.

Space weather is now widely recognised as giving rise to several significant risks to our modern technologically-based society.  Dr Eastwood examined what the worst-case scenario might be, and outlined what steps are being taken to protect ourselves from space weather more generally.

Imperial’s activities in space weather research were discussed.  These include constructing large scale computer models of the region where the Earth’s magnetic field dominates in space (the magnetosphere) and developing magnetometers for space-based space weather monitoring.

This Fireside Chat is part of our very own mini-series over summer.

Live streamed Fireside Chats with Imperial experts will be run on the occasional Friday afternoon @ 4pm, featuring more of a short presentation or talk, an informal chat and Q&A with the audience. We will also virtually take you abroad with a few guided visits to awesome international scientific facilities!

Book your free (fireside) place below and your confirmation email will include the Zoom link and login instructions, with a reminder sent to you on the day!